What motivates you to become a stand-up comedian? Is it that you are a loser?

Last week I attended an Open Mic night. This open mic took place in the back room of an improv studio, inside of a mall at 7:00 in the evening on a Thursday. I knew that it was going to be bad before I got there.

The first question the emcee asked the audience was, “How many of you are not comics?” Five of the 20 people in the room raised their hands. He then wondered, “So why are you here?”

The first comic told a story about asking his high school teacher out on a date after graduation. Then he stared at the audience for a few minutes. He was high.

One performer paused after a series of bad jokes and pleaded with the audience:

“Why aren’t you laughing?

How could I make that joke better?

…I guess pedophilia‘s not funny.”

The next entertainer ran on stage singing a lively song about watching bad comedy in a mall. Then he confessed that he’d drank four beers during the show. He could tell that his life was on track because this was exactly where he wanted to be on a Thursday night – telling jokes in an abandoned mall. A few seconds later, he became agitated that the audience had “lost energy” and stormed out of the room.

We were laughing at his jokes.

This open mic was an emotional roller coaster for the audience. More than one unstable “comedian” would abruptly cut himself off and berate the audience for not laughing loud enough or at all. 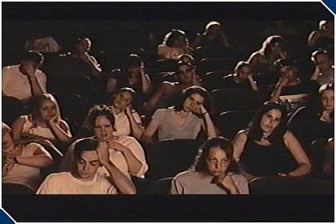 One guy did his set in a French-like dialect (?). He was the only comic who completed his set without incident. He didn’t care that no one “got” his jokes. He even politely told us to have a nice evening as he left the stage. He was definitely my favorite.

Hopefully, now you understand why I asked my opening question. All of the aspiring comedians at that open mic were high, drunk, depressed, or [insert uncomfortable adjective]. I understand that this was a substandard comedy show, but all comics start at the bottom. It makes me wonder whether everyone who pursues a career in stand-up comedy is fueled by intense psychological issues.

Obviously, I will attend another open mic before committing to an opinion. Probably not the same one, unless I need something to write about.

I hit Publish!! After a solid 14 day absence, I finally posted on RAEZYN again. I didn’t stop writing for those two weeks, I kept pumping out jokoids. Regardless, yesterday I wrote a thrilling account of my first time on stage!

As everyone is aware by now, I am new to stand-up comedy. I need guidance: How to write jokes, how to structure a set, and how to avoid fainting on stage. So last weekend, I attended a stand-up comedy seminar taught by comedian Joe Matarese. It was well worth driving 2 hours one-way to Baltimore MD.

I met some local comedians that were not only funny, but supportive as well. I had some time on stage during which I was *supposed* to perform my act (read what actually happened). Instead of rolling their eyes at the newbie from Virginia, the comics gave me some helpful suggestions on how to develop my act and they even laughed at some of my jokes!

In order to become successful, you need the support of your peers. And as it turns out, comics are willing to support each other because they’ve all started at the beginning. Experienced comedians know that they wouldn’t be where they are in their careers without the encouragement of supporters. Therefore, this group of funny Baltimore comedians welcomed me, the confused beginner from Virginia.

On Saturday evening, I dragged my husband along with me to watch Joe Matarese headline at Magooby’s Joke House. Paul Spratt had the guest spot and Ayanna Dookie was the feature. Together, they reaffirmed the fact that I love comedy.

What Are You Looking For?

Recent Posts: The Lord Our Healer

Be Filled with Holy Spirit

Speak. What you Say will Be

Be Delivered from Anxiety

Give God the Glory